In general terms, the weather conditions that were previously reported still prevail, as rains continue to be below the historical average for this time of year. Although scattered rains were recorded in January, the crop is currently undergoing a temporary drought stress condition. It is worth noting that this condition is fully reversible, provided timely and abundant rains are recorded in the next months. Nonetheless, the extended weather forecasts augur a season of erratic rainfall, at least during the first quarter of the year. Hence, although the peanut crop is in a suitable condition nowadays, it’s too early to draw significant conclusions about the expected yields and the productive potential. There is still a long way to go. 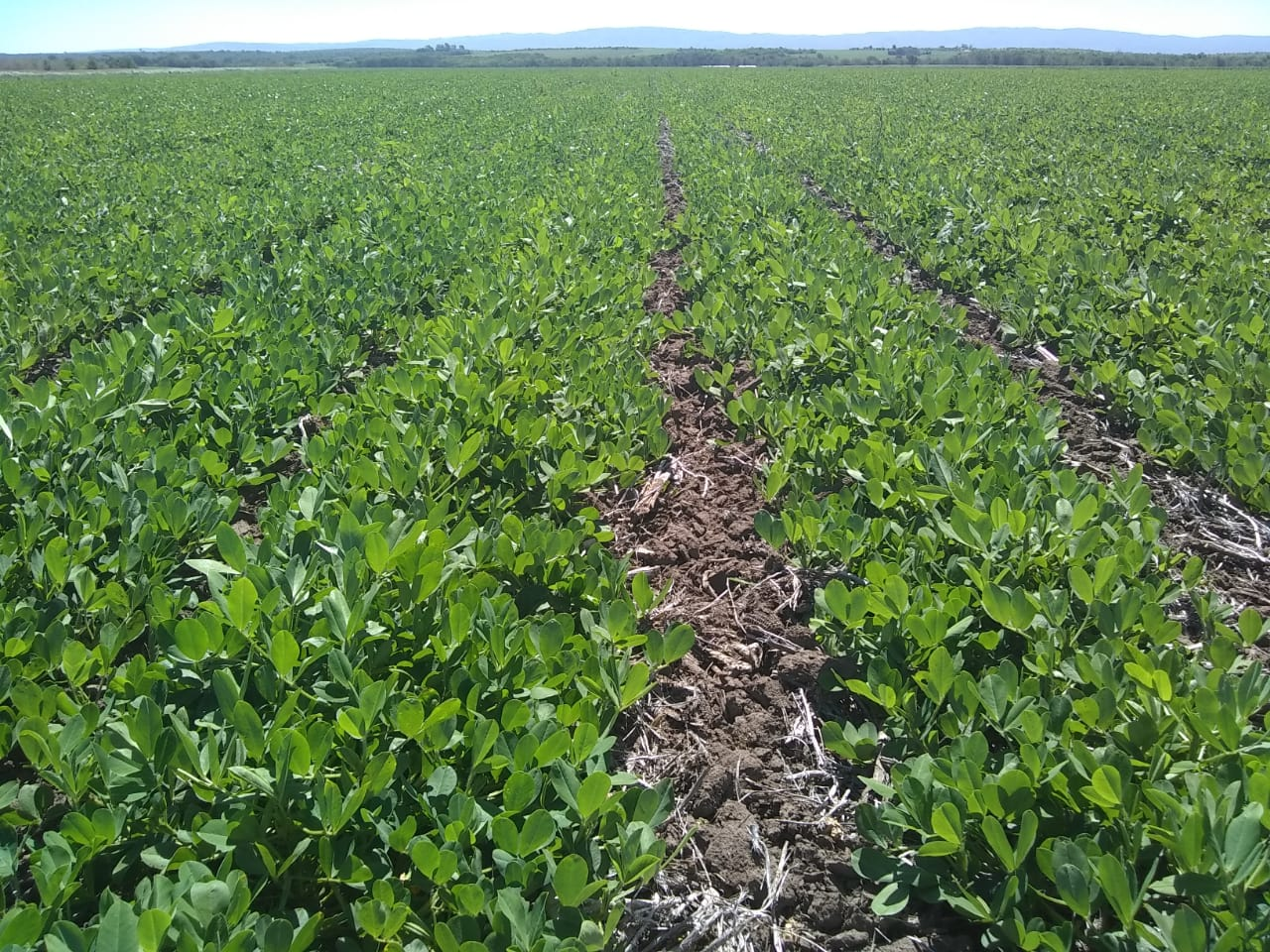 Peanuts in the South-Central area

As of today, the peanut crop is already undergoing an active growth and development stage. In the previous report, we observed that the peanuts did not progress in their phenology due to the fact that the CGR (crop growth rate) had slowed down compared to the previous season. This phenomenon was mainly related to the low night temperatures that lowered down the temperatures of the soil. In the last weeks, in which the night temperatures exceeded 18 °C, the crop attained a great recovery since it responded actively to the better conditions of the environment.

All in all, as the peanut crop enters the period of maximum water demand, it’s imperative to receive new rains in the short term that can guarantee a right development. At this point of time, the peanut crop 2021 is far from secured.

The main peanut area in Argentina includes the provinces of Cordoba, La Pampa, San Luis and Buenos Aires. In general terms, it can be divided as follows: 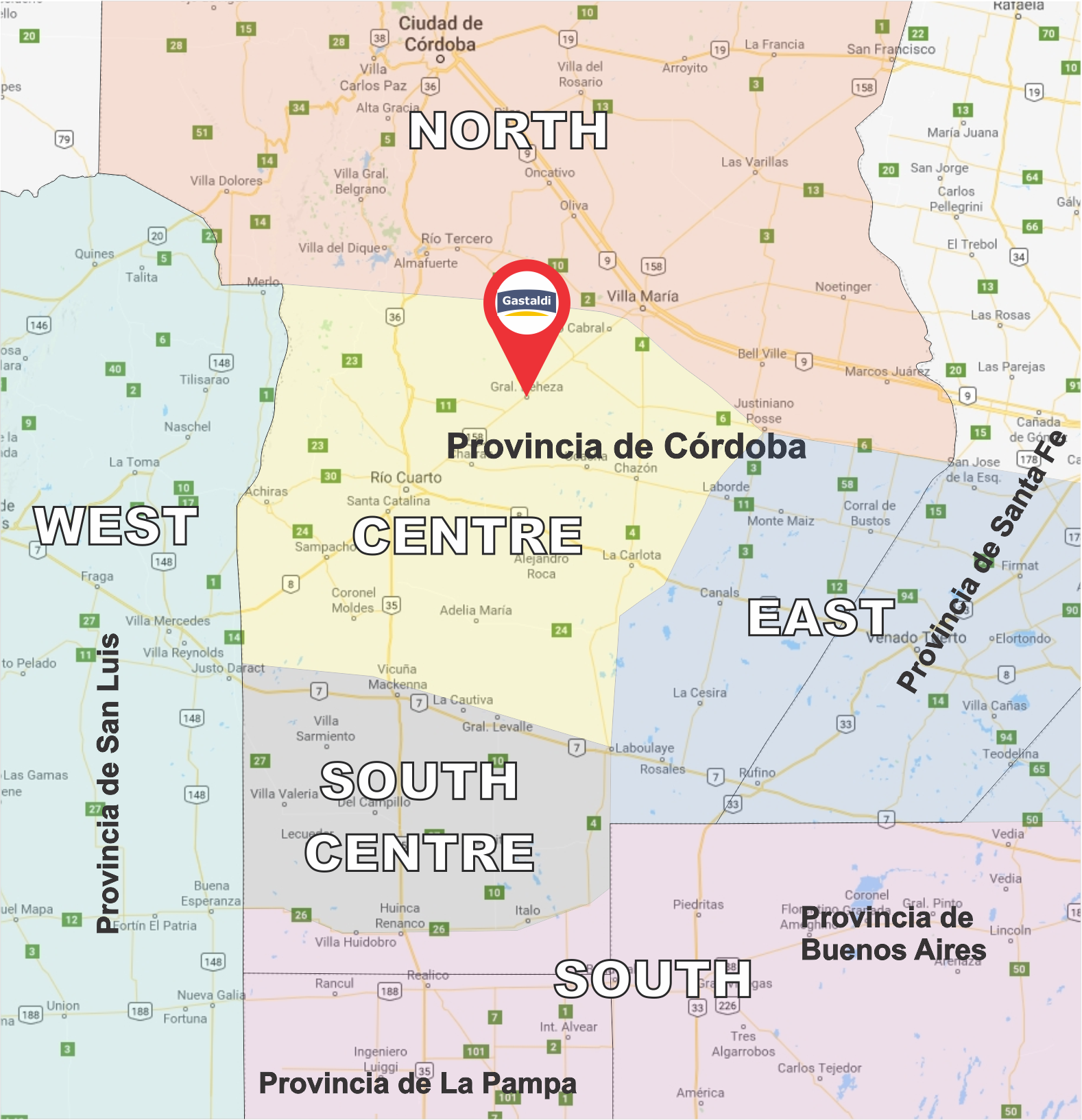 The image below shows the general state of the crop classified according to the criteria of the Gastaldi’s agronomists after the usual rally across the different fields planted with peanuts. 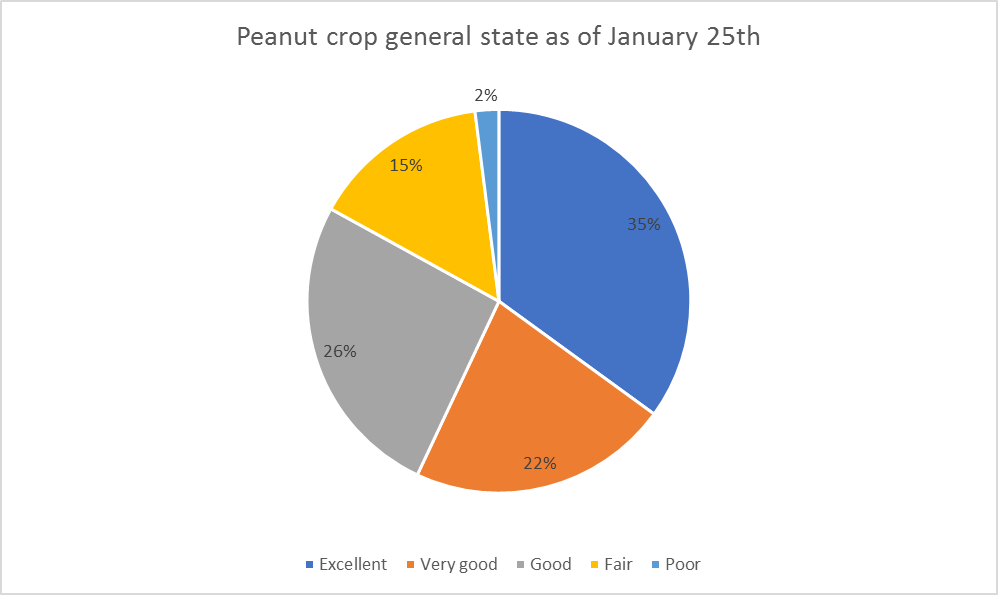 General state of the crop as of January 25th

During the first three weeks of January, isolated storms were recorded, bringing scattered rains mainly to the eastern and southern areas of the Cordoba province. The following images show the climatic events and the accumulated rainfall in the province: 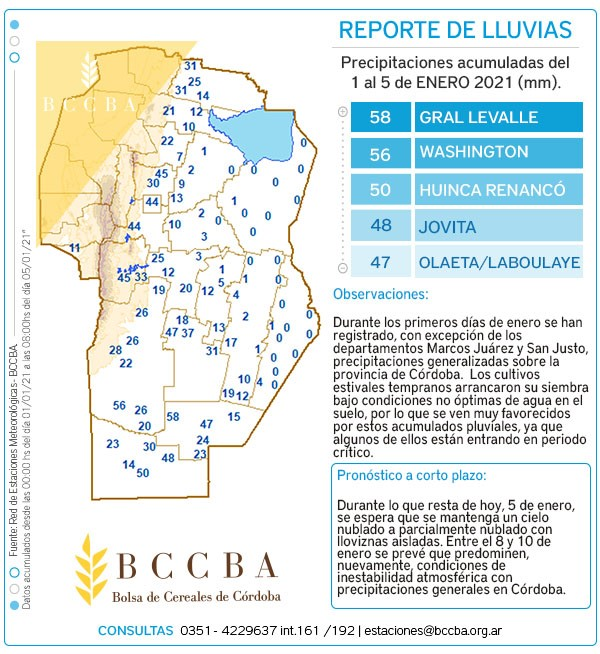 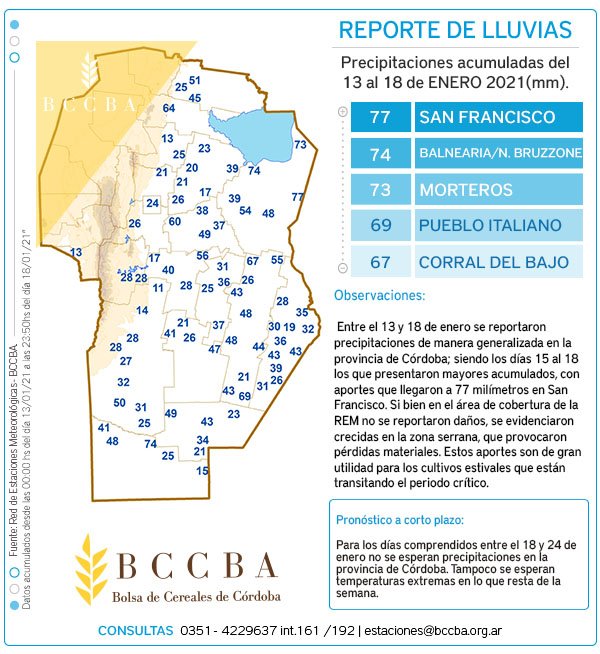 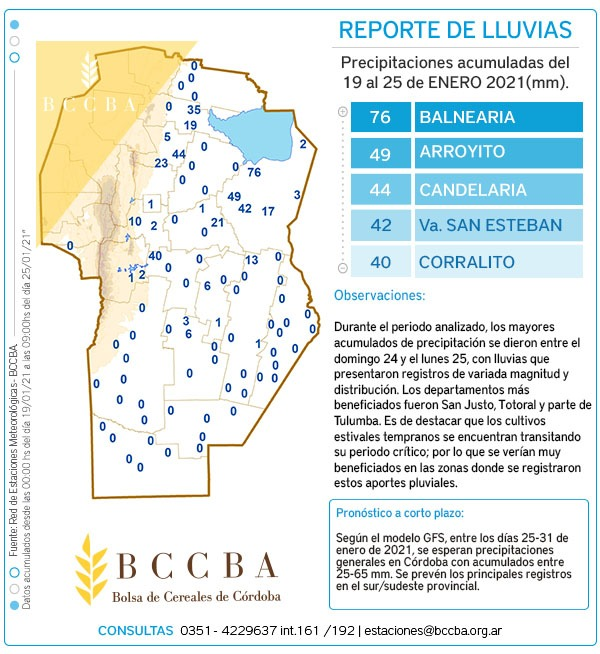 Regarding temperatures, the average of the minimum temperatures hovered around 17 °C, while the maximum temperatures were between 33 °C and 36 °C. It is worth noting that most peanut areas are currently affected by a significant persistence of high temperatures, mainly reported in the Central, Western, South-Central and Northern areas. These extreme hot conditions, added to other situations such as the lack of moisture in the soils given the lack of rains during the last winter and spring, contributed to creating the reported temporary drought condition for the peanut crop.

The maximum retention capacity or “field capacity” implies that the extraction of water by the vegetables occurs without any difficulty. Between the field capacity and the permanent wilting point there is the range of what we call useful water in the arable layer.
The following figure shows that, towards the end of November in the peanut area, the average values are between 30% and 40% of useful water in the arable layer (temporary drought condition). As can be seen in the graph, moisture levels deteriorated significantly in relation to the values recorded at approximately the same date of 2019. Source: FAUBA. 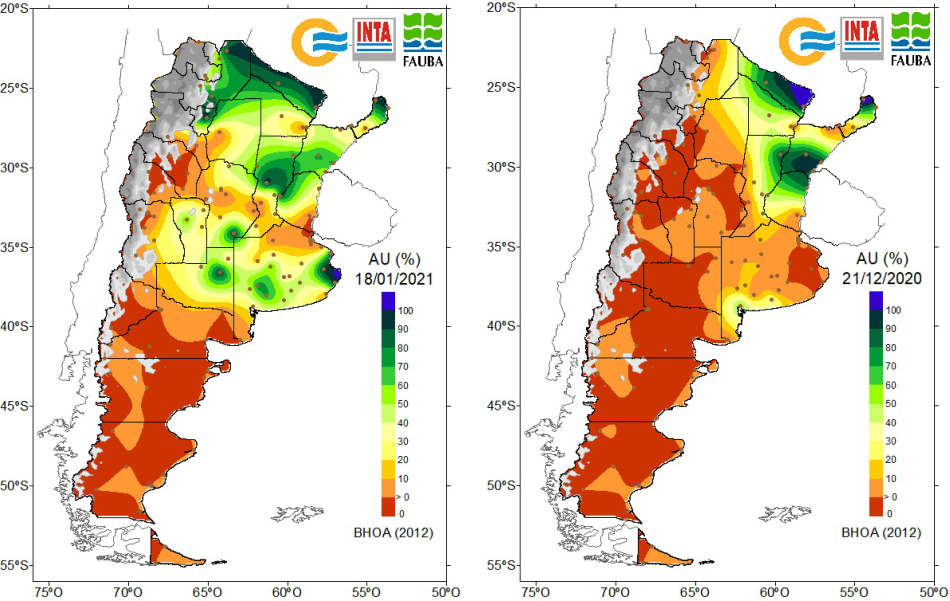 Although the temporary drought condition prevails, the AW improved in January compared to December, thanks to the reported rains. This is good news for the crop but it’s not enough water to guarantee a right development in the coming weeks.

The first herbicides applications to prevent and control peanut pox were begun. This task was started in all areas of our reference map, except for those that are undergoing the most severe conditions of hydric stress.

Due to the hydric stress, insecticides applications to control spider mite were increased. In many cases, farmers had to repeat the applications due to the high incidence of this pest. The presence of this mite is being carefully monitored since immediate action should be taken if its presence grows out of control because it causes irreparable damage to the crop. 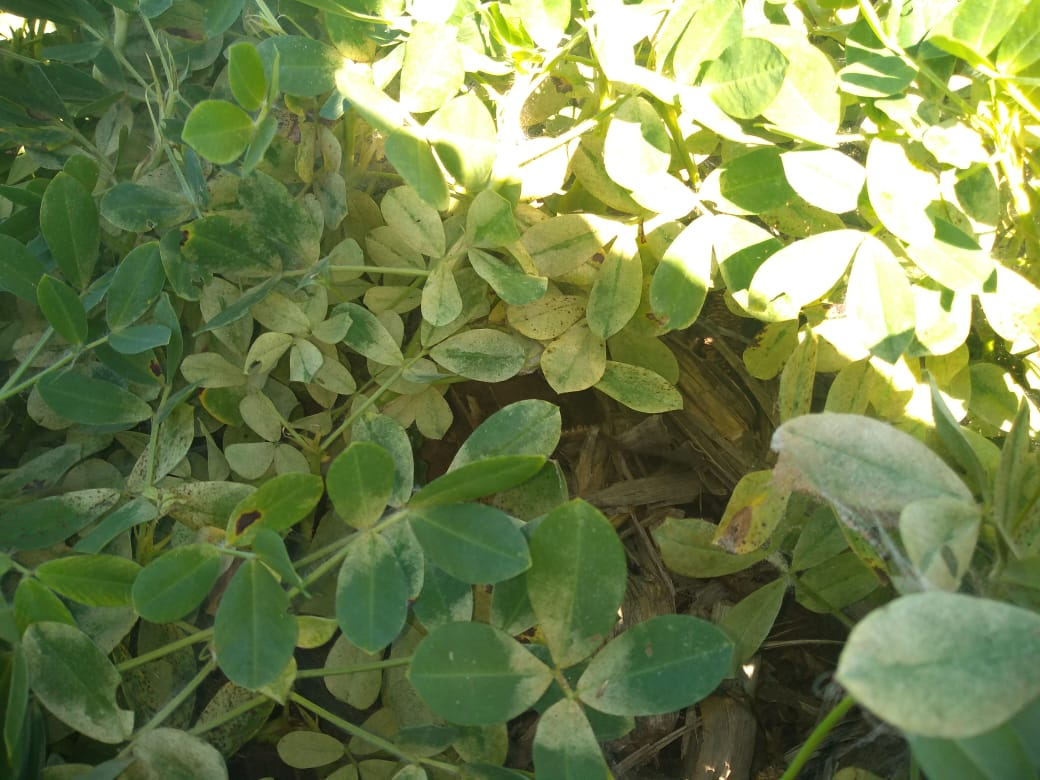 In general terms, the peanut crop is undergoing an active growth stage. The following images show the phenological state of the crop in general terms and by area. 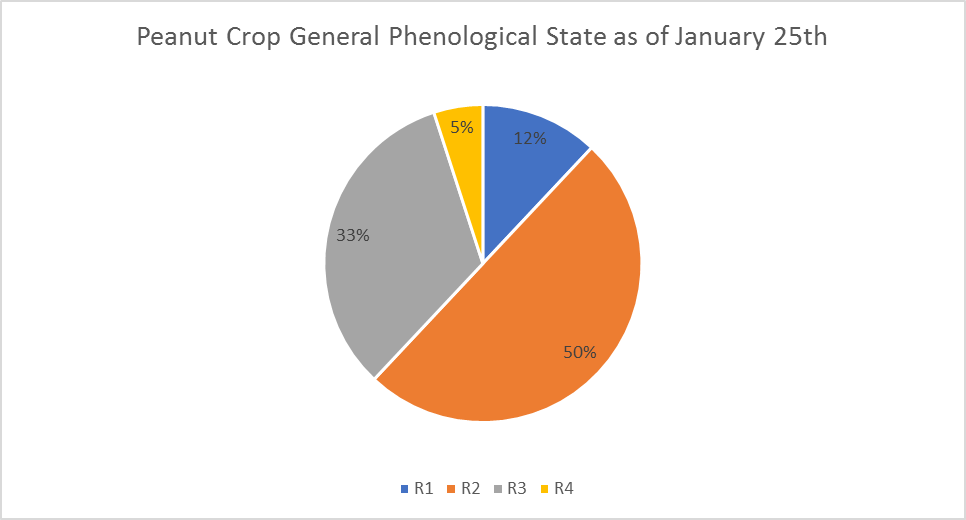 General phenological state of the peanut crop as of January 25th

After the analysis and the information presented before, we conclude that the peanut crop is in a good condition nowadays. As it usually happens during La Niña years, it’s difficult to draw general conclusions for the entire crop, because different areas and even different fields within the same area may receive different amounts of rain, thus creating dissimilar outlooks.

Although the productivity of the crop is not irreversibly affected at the moment, the peanut plants are already expressing signs of stress due to the drought. The peanut crop is a good project today but, results are by no means, guaranteed at this point of time. Rains in the coming weeks and months will shape the expectations regarding yields and productivity as well as the mood of the entire peanut industry in Argentina. 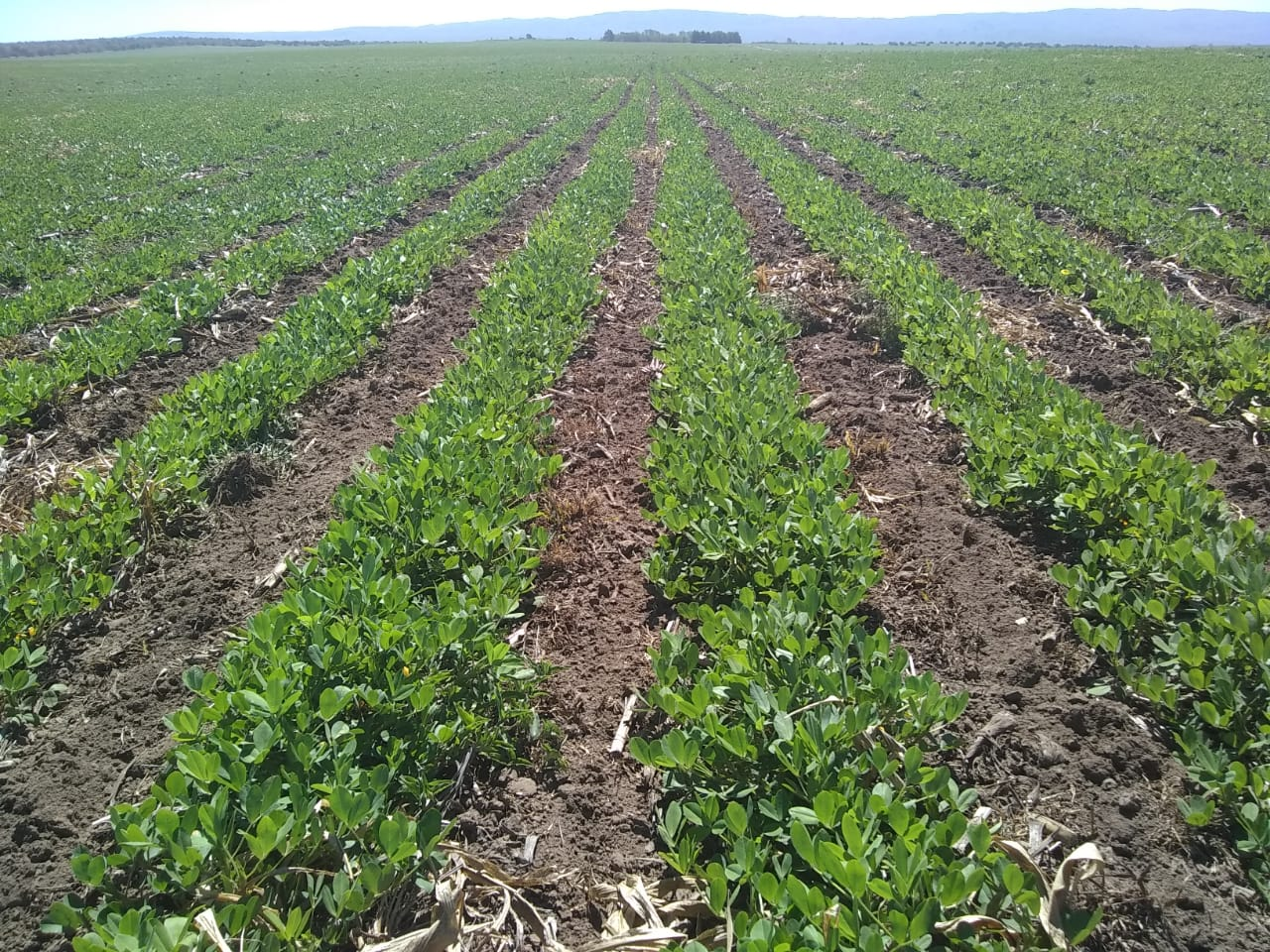 Peanuts in the Central area 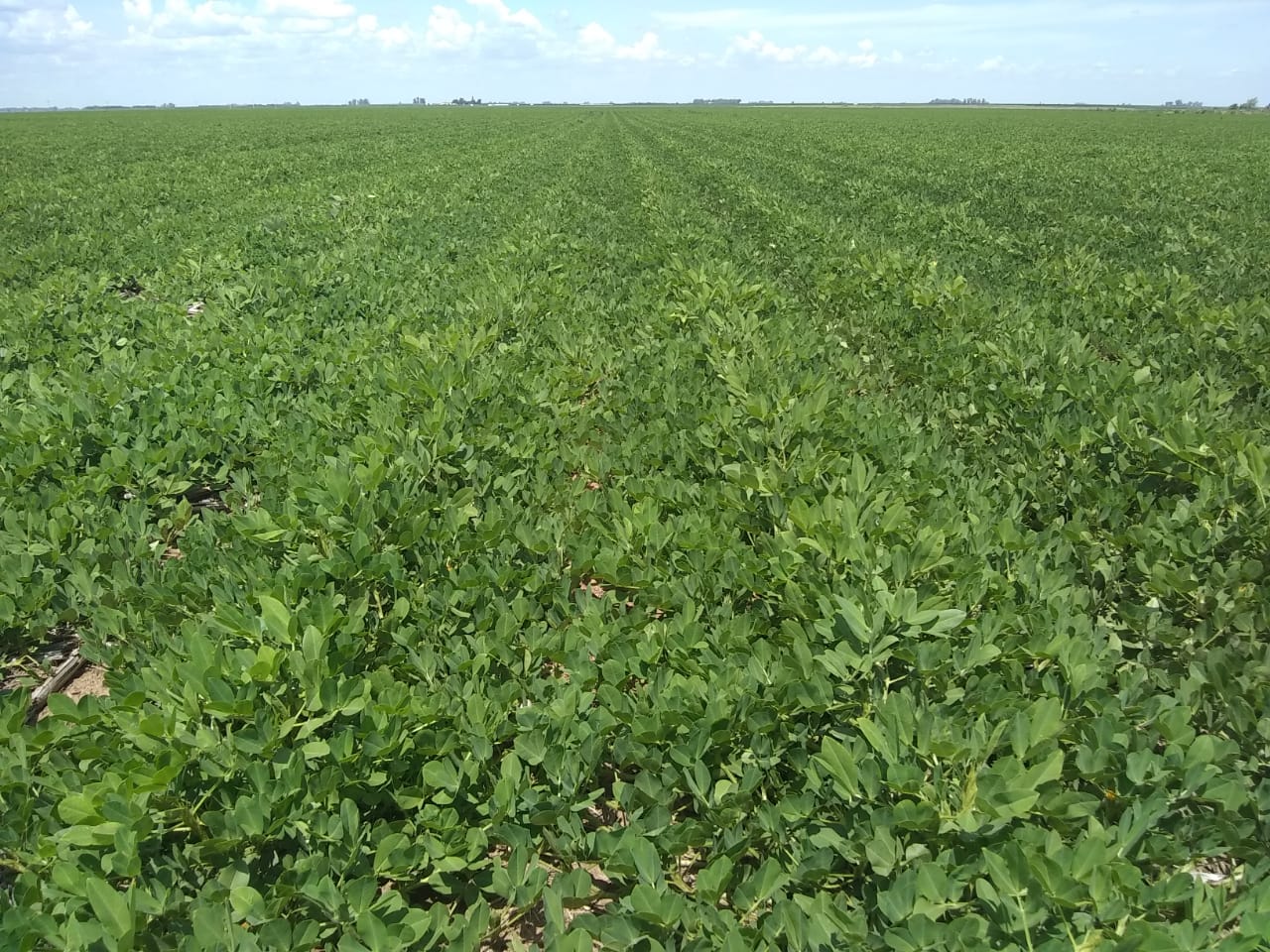 Peanuts in the Eastern area 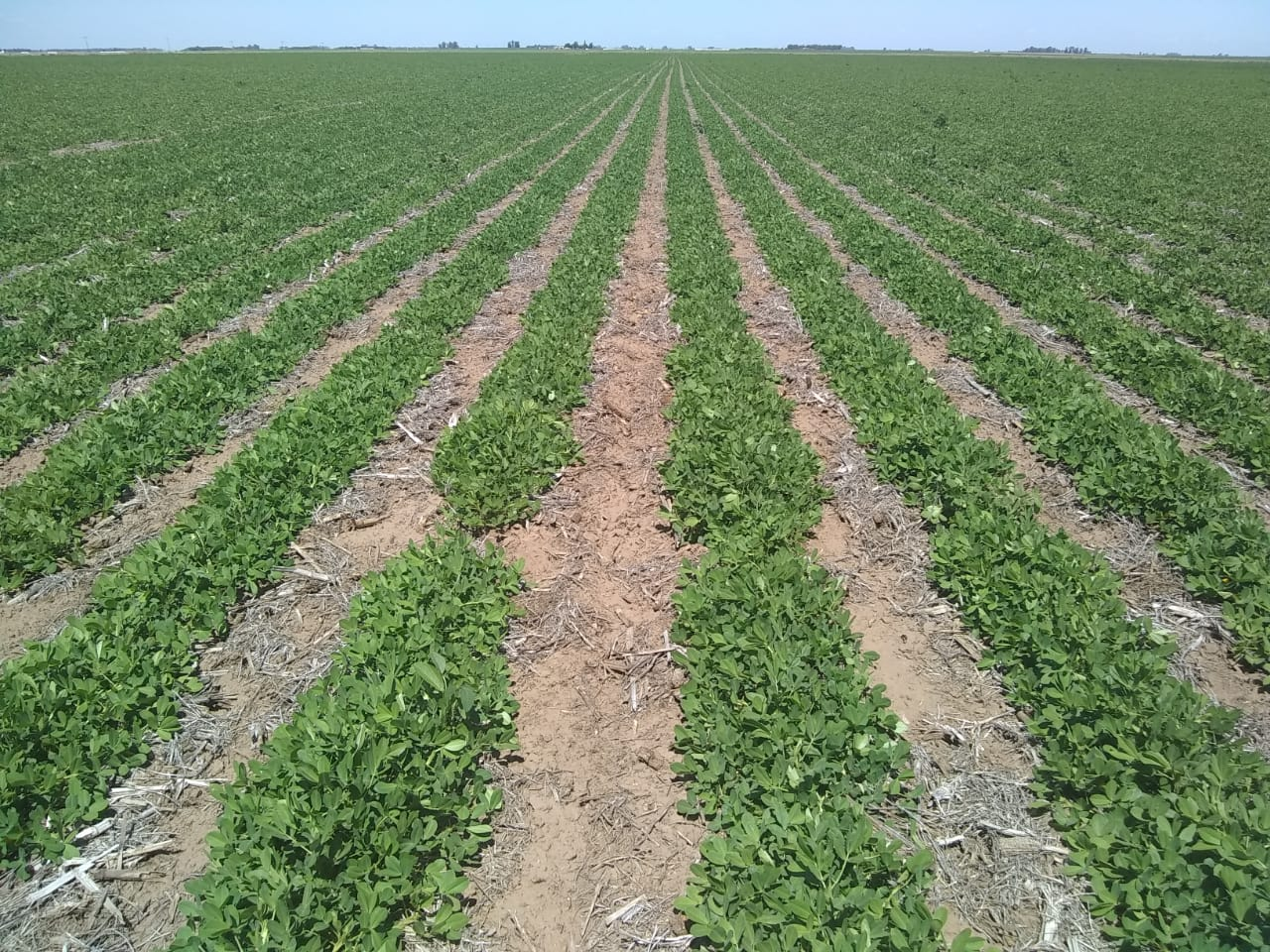 Peanuts in the Northern area